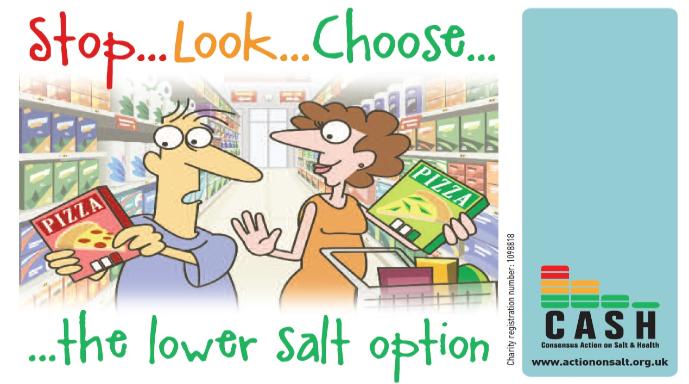 This year's National Salt Awareness Week was held between 10th and 16th March, and focused on the need for better labelling.

Foods can be surprisingly high in salt, fat, saturated fats and sugar, but many people struggle to understand nutrition labels on food packaging. CASH have long been pushing for more consistent front of pack food labelling.  In 2014 our attention focused on the benefits of having a consistent front of pack label, making it easier than ever for consumers to know what is in their food, and compare it with others.

We congratulated those that have signed up to the Department of Health’s new front of pack labelling scheme, and encouraged others to follow suit.  The theme for this years Salt Awareness Week aimed to show that there are options for consumers that want ‘less salt please!’, and to make it easier to choose them.

Earlier this year, CASH launched a new, free health app called FoodSwitch, which help you find out what’s in the food you’re eating, so you can make simple switches to healthier options. FoodSwitch allows you for the first time to scan the barcodes of your food and drinks products and instantly see whether they are high (red), medium (amber) or low (green) in fat, saturates, sugar sand salt per 100g. It also searches the database for similar but healthier alternative products, making it easier than ever to switch to healthier food choices. To coincide with Salt Awareness Week, we launched SaltSwitch, a new function of FoodSwitch, which enables consumers to easily chose less salty products. A reception at the House of Commons took place on 12th March, with speeches the shadow Public Health Minister Luciana Berger, the Chief Executive of the British Heart Foundation Simon Gillespie, and an impromptu talk from the Public Health Minister Jane Ellison.The fifteenth annual Salt Awareness Week was a great success, with a tremendous amount of support across the country. Some key successes from the week include: