‘Posh’ salts such as rock and sea salts have been popularised by TV chefs who sprinkle them liberally on their culinary creations. New research from CASH (Consensus Action on Salt and Health) and Which? reveals that gourmet rock and sea salts are as damaging to your health as regular salt, despite on pack claims that the products are ‘natural’ and ‘contain minerals’.

The sodium chloride content of ‘posh’ salts, such as Maldon and Himalayan (Best Care Products), and table salt (Saxa), were measured by a public analyst [Ref 1].  Sodium and chloride combine to form salt (NaCl), it is this combination of minerals which puts up our blood pressure, leading to strokes, heart failure and heart disease and are also linked to osteoporosis, stomach cancer and kidney disease.  The results show they all contain just as much sodium chloride as each other, and are therefore just as damaging for our health.  However, according to a Which? member survey [Ref 2], those who buy rock or sea salt cite reasons such as believing they are healthier (24%) or more natural (39%) than table salt. 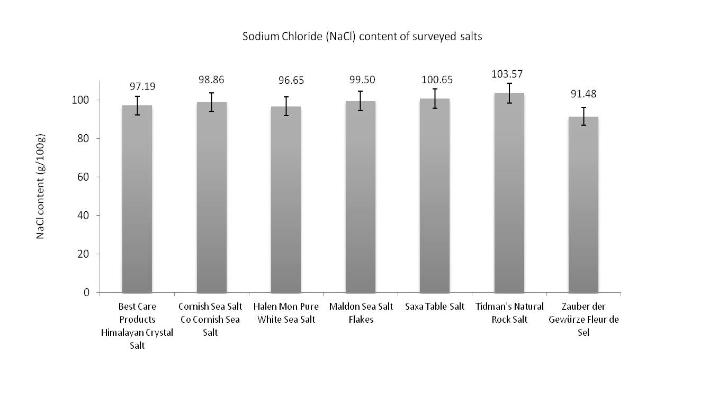 NB Some salts total more or less than 100% NaCl per 100g. There is a level of confidence of 95%, due to measurement uncertainty (i.e. error associated with analysis), figures +/-5% are to be expected. Fleur de Sel was slightly lower in NaCl, this is due to higher water content (6.5%).

“It is disgraceful that chefs still encourage people to use so much sea and rock salt” says Professor Graham MacGregor of the Wolfson Institute of Preventive Medicine and Chairman of CASH. “This has the added danger that, as the crystal sizes are much larger and don’t taste as salty, more salt is consumed.  Reducing salt intake by just by 1 gram per day is predicted to prevent over 6,000 deaths from strokes and heart attacks a year [Ref 3].”

A number of brands make spurious health claims on pack declaring that their product is ‘natural’, contains ‘essential minerals’, and is a ‘tastier and healthier alternative’ to table salt [Ref 4]. Salt is NOT a good source of minerals - eating a healthy, balanced diet will ensure you have enough minerals in your diet.  For example: Tidman’s state on their Natural Rock Salt "It is a natural seasoning containing important minerals essential for a healthy diet." Cornish Sea Salt Co state “Cornish Sea Salt is the tastier and healthier alternative to traditional table salt by retaining over sixty naturally occurring trace elements and minerals essential for wellbeing.”

Kay Dilley, nutritionist at CASH says "Most of the salt we eat, about 75%, is hidden in the food we buy, and we are already eating more than our daily recommended maximum of 6g [Ref 5&6].  If you have to use salt, try to limit the amount you use, there really is absolutely no need to add salt to your food.”

Even though rock and sea salt cost more than table salt, nearly half (46%) of Which? members who buy salt think it's worth paying extra for.  There is a 22 fold difference in price between the premium Halen Mon Pure White Sea Salt at £1.80 and Saxa Table Salt at £0.08 per 100g. Fleur de Sel from Zauber der Gewürze, a specialist salt, costs a staggering £9.29/100g, 116 times the cost per 100g of Saxa Table Salt at £0.08 per 100g. Despite these huge variations in cost, they are all just as damaging for your health.

Which? chief policy adviser, Sue Davies, says: "Many of us are trying to reduce the amount of salt in our diet, but our research shows that people are needlessly spending more money on 'premium' salt as they often believe it's healthier than traditional table salt.

“Given that most of the salt we eat is already in the food we buy, the cheapest - and healthiest - option would be to stop adding extra salt to food altogether. Which? is calling on food manufacturers to reduce the amount of salt in their foods, and we'll be monitoring their progress over the coming months."

Myth 2. Gourmet salts contain minerals essential for good health
Gourmet salts are not a good source of essential minerals, instead you can get all the vitamins and minerals you need from a balanced diet with plenty of fruit and vegetables.

Myth 3. Gourmet salts taste better or stronger so you can use less
There is no evidence that people use less of any type of salt. If you prefer the flavour of a particular type of salt, and really want to use it, use less to help cut down on your salt intake. Some gourmet salts also have a larger crystal size, these might not taste as salty as finer grains so the danger is you could end up using even more!

Myth 4. Gourmet salts are ‘natural’ so are better for your health
All salt can be considered ‘natural’, a term which infers healthy, but as they are all made of sodium chloride, a metallic substance, they are not healthy.

Myth 5. Salt is needed in food for flavour
There are plenty of great flavours around, such as herbs, spices, pepper, lemon and garlic, which can be used instead of salt to flavour food. It only takes a couple of weeks to get used to food without salt so stick with it!

* Prices correct at time of purchase
NB Some salts total more or less than 100% NaCl per 100g. There is a level of confidence of 95%, due to measurement uncertainty (i.e. error associated with analysis), figures +/-5% are to be expected. Fleur de Sel was slightly lower in NaCl, this is due to higher water content (6.5%).

Ref 1 – Survey Details
• This survey looked at 7 salt products available from supermarkets and online, a selection of rock and sea salts and one table salt.
• The sodium chloride and moisture contents were analysed using a Public Analyst (Kent Scientific Services)
• All products were bought in Sept/Oct 2011 and submitted for analysis on 19 October 2011

Ref 2 – 1358 Which? Connect members were surveyed online between 27th October-3rd November 2011. Results will be published concurrently in Which? Magazine on 17th Nov 2011

Ref 4 – There are a number of unsubstantiated health claims made by companies on pack, website or other material, these include:
• Best Care Products Himalayan Crystal Salt “Natural, unrefined whole crystal salt.” (on pack) “This special salt is only waiting for the moment to have its inherent, stored energy, its bio-photon content, set free, by adding water to it. Such crystalline sole is a pure ocean of energy.” (company website)
• Saxa refers to salt as “nature’s way of adding flavour” (company website)
• Tidman’s "It is a natural seasoning containing important minerals essential for a healthy diet." (on pack)
• Cornish Sea Salt Co “Cornish Sea Salt is the tastier and healthier alternative to traditional table salt by retaining over sixty naturally occurring trace elements and minerals essential for wellbeing and delivers more taste for less salt.” (on pack)
• Maldon "...a distinctive texture and salty flavour, which means less is required." (company website)
• Halen Mon “...And because sea salt naturally tastes stronger, you can use less in your cooking and still get the same intensity of flavour.” (company website)

Ref 5 – Current salt intake in the UK is 8.6g; the maximum daily recommendation is 6g (about a teaspoon)http://tna.europarchive.org/20110116113217/http://www.food.gov.uk/multimedia/pdfs/08sodiumreport.pdf