• NEW research demonstrates that some cheese makers are not going far enough when it comes to salt reduction; putting their customers’ health at risk [1].
• Despite many cheeses meeting the recommended Department of Health 2012 salt targets [2], 81% are HIGH in salt [3], with some cheeses containing more salt than SEAWATER!
• The Department of Health MUST force the food industry to sign up to the new 2017 salt reduction targets now; to help save the maximum number of lives [4].
• Then, much more challenging targets need to be set.

Salt levels in cheese are high – with large variation between different types of cheese and within the same type of cheese, according to a new paper by Consensus Action on Salt and Health (CASH) being published in the BMJ Open.

Cheese is one of the ten BIGGEST contributors of salt to the UK diet, with cheddar and cheddar-style cheese being the most popular, so lowering their salt content would make a real difference to our salt intakes. On average, salt content was significantly higher in branded (1.78 g/100 g) cheddar and cheddar-style cheese compared to supermarket own-label products (1.72 g/ 100 g) [5]. This demonstrates that it is technically possible to produce cheese with less salt in it.

The survey also looked at the salt reduction targets for ten types of commonly consumed cheese, which were set by the Food Standards Agency and implemented by the Department of Health, to be achieved by 2012 [2]. Cheese types that have salt reduction targets [6] had significantly less salt than those that do not have targets –1.66g/100g Vs 1.78g/100g. What is surprising, however, is that whilst 85% (333 of the 394) of cheeses have already met their targets, 81% (318 of 394) would still get a red (high) colour coded rating for salt [3].  Disappointingly, the majority of branded cheese companies, unlike retailers, have not even signed up to the Department of Health’s salt reduction programme [7].

Kawther Hashem, Nutritionist for Consensus Action on Salt and Health and co-author of the study says, “These results provide evidence that the UK salt reduction strategy, based on a series of salt targets for different food groups, is working, but that the targets need to be much more stringent if we are to get salt intakes down to less than 6g a day (the recommended maximum).

“These big brands need to stop dragging their heels and catch up with the supermarkets now, or they will be left behind.

“It’s worth looking at the label and choosing a lower salt and fat version of your favourite cheese, or better yet, to eat very small amounts.  Children’s cheese (e.g. cheese strings, singles and spreads) are often marketed as ‘healthy’, yet can contain at least the equivalent of 75% seawater per 100g on average! These cheeses should only be given to children occasionally, or not at all.”

Professor Graham MacGregor, CASH Chairman and Professor of Cardiovascular Medicine at the Wolfson Institute, Queen Mary University of London says, “Reducing salt is one of the most cost-effective measures to reduce the number of people suffering and dying from stokes, heart attacks and heart failure.

“Cheese is a big contributor of salt to the UK diet and it is vital that the Department of Health forces the cheese industry to implement the new targets immediately, and to set more challenging targets for the future.  E.g. in New York City, the target for cheddar cheese has been set to 1.5g/100g by end of 2014 [10] which is already 14% lower than the new 2017 UK target (1.75g/100g).

“At the World Health Assembly in May 2013 [11] it was unanimously agreed that all countries should reduce their daily salt intake by 30% towards a target of 5g per day, by 2025. Yet our study indicated that some imported cheese contained higher salt levels than those made in the UK, so we call on other countries to take action on salt, NOW.”

Ref 3 - The ratings for red, amber and green for each nutrient are based on the Department of Health Guide to Creating a Front of Pack (FoP) Nutrition Label for Pre-packed Products Sold Through Retail Outlets:
Traffic light labels are given per 100g, with a threshold cut-off per portion.  Energy (calories and kilojoules) are not coloured. Salt - Green ≤0.30g/100g, Amber >0.30≤1.50/100g, Red >1.5g/100g or >1.8g/portion 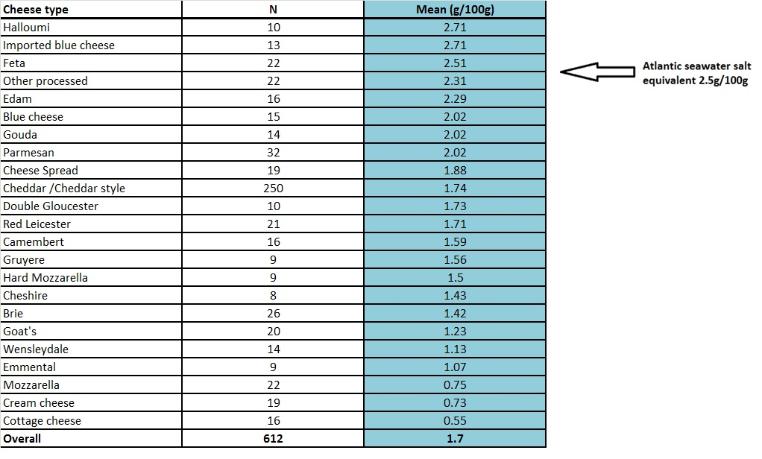