Ready to eat salads could be damaging our health, according to a NEW nationwide product survey1 by Action on Salt. The expert group, based at the Wolfson Institute, Barts & The London, Queen Mary University of London, found that the salt content of salads bought from restaurants, sandwich/coffee shops and fast food outlets has worryingly INCREASED by 13% since they were last surveyed in 2014 (from 1.65g to 1.86g per serving on average2), highlighting a distinct lack of commitment from the food industry to reduce salt.

More than a third (36%) of the 213 restaurant, sandwich/coffee shop and fast food salads surveyed contained a shocking 2g of salt or more per salad. The worst offender was Nandos Mediterranean Salad with Chicken Breast and extra hot sauce, with 6.2g salt - more than an adult’s entire DAILY recommended limit of salt3 in just one salad!

Surprisingly, Pizza Express Grand Chicken Caesar Salad with Dough Sticks contains 5.3g salt per serve – more than their Classic Margherita Pizza4 – and McDonald’s Grilled Chicken and Bacon Salad with Balsamic Style Dressing contains the same amount of salt as their Cheeseburger5. Even salads deceivingly branded as ‘healthy’ contain high amounts of salt, such as Benugo’s Supercharged Omega Salmon with 3.5g salt, over half of an adult’s maximum recommended daily limit.

Although nutrition information was available at the majority (15/21) of the restaurant and fast food chains included in the survey (either on pack, on the shelf label or at the counter on request) only one chain (Costa) provided full colour-coded nutrition information6. Without this information readily available at their disposal, consumers struggle to know which options contain the least amount of salt, making it impossible to make an informed decision. This clearly demonstrates the need for clear consistent nutrition labelling in restaurants and fast food outlets to help customers compare products and make healthier choices.

Action on Salt also surveyed all ready-to-eat salads from retailers, including pasta, rice, couscous, noodle and other grain (e.g. quinoa) salads from the deli and ‘food to go’ sections. Over the last 4 years, the average salt content of retail salads has remained relatively unchanged7 demonstrating a lack of progress in salt reduction by the food industry. Worryingly, the salt content of some has increased since 2014, including Tesco’s Chicken & Bacon Pasta which now contains more than double the amount of salt (from 0.40g per 100g in 2014 to 1.00g per 100g in 2018)8.

Of the 312 retail salads surveyed this year, M&S’ Teriyaki Chicken Sticky Rice Salad with a soy and wasabi dressing was the saltiest with a shocking 3.50g per pack, more than half an adult’s maximum daily recommended limit. Only 17% of retail salads surveyed were low in salt and would receive a green label on front of pack9.

Such excessive levels of salt are completely unnecessary; healthier salads with much less salt are available, as demonstrated by the large variation in salt per portion between salads within the same category. For example, Morrisons Chicken and Bacon Pasta (2.54g/250g pack) contains over FOUR times more salt than Asda’s Spicy Chicken Pasta (0.60g/300g pack). 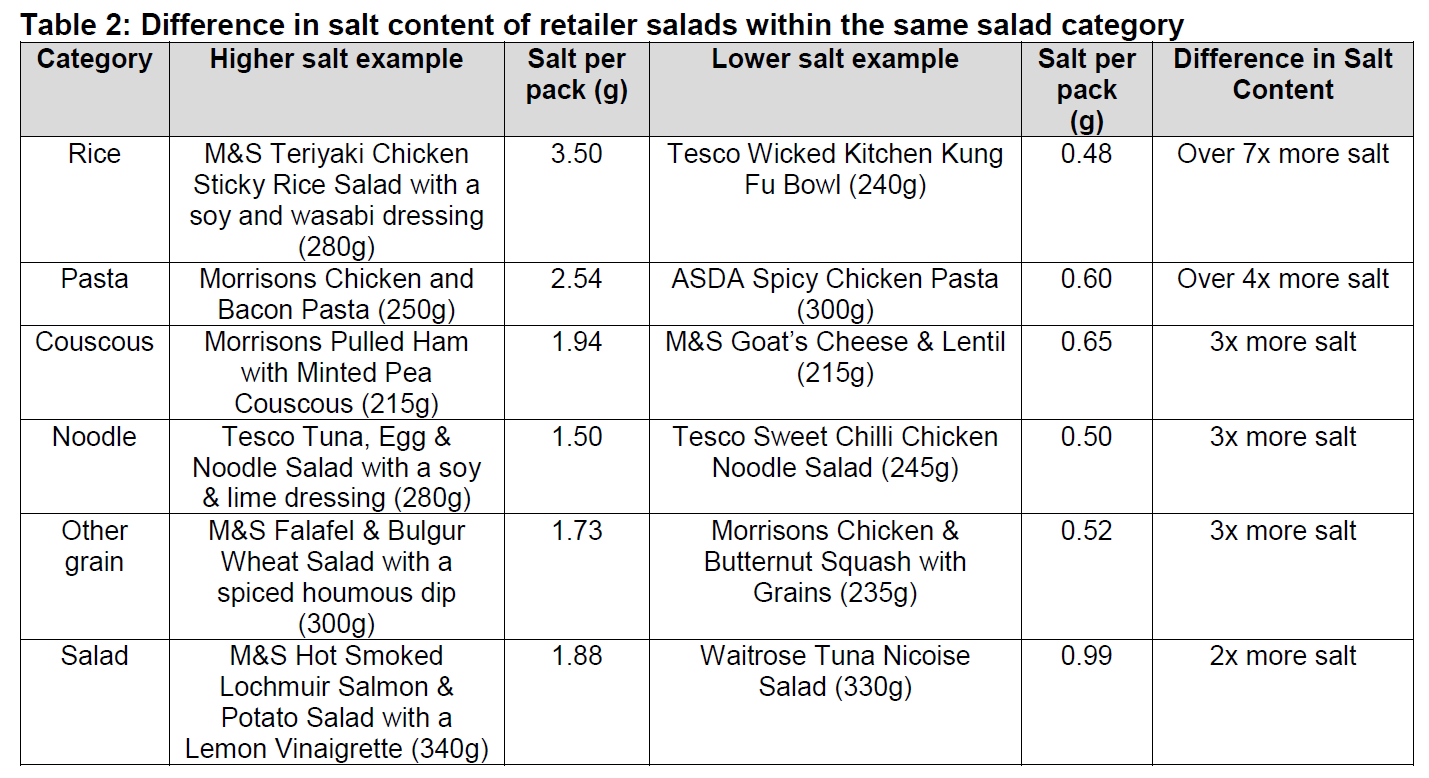 Of the restaurant chains, the worst was Zizzi’s Arcobaleno ‘Rainbow’ Salad with Goat’s Cheese with 20g of saturated fat11, the entire maximum recommended intake for adults, followed by Pizza Express’ Pollo with Dough Sticks with 17.1g saturates12.

Sarah Alderton, Nutritionist at Action on Salt says, “Salads are typically considered to be a healthy option, but restaurants and retailers are continuing to add unnecessarily high amounts of salt and saturated fat to their salads and putting the health of their customers in jeopardy.  We want the food industry to be transparent by displaying clear, colour-coded nutrition information on front of pack or at the point of sale, to help consumers make a more informed decision wherever they choose to eat.”

Mhairi Brown, Nutritionist at Action on Salt, adds, “Up to 75% of our salt intake comes from salt added to food by manufacturers and this survey demonstrates just how easy it is to unwittingly eat excess salt, with such high amounts added to our go-to ‘healthy’ choice of salads. This survey highlights the urgent need for Public Health England to reinvigorate the UK’s salt reduction strategy”

Graham MacGregor, Professor of Cardiovascular Medicine at Queen Mary University of London and Chairman of Action on Salt, adds, “It’s shocking to see that certain restaurants and supermarkets have failed to take responsibility to reduce salt – especially after our 2014 survey exposed their dangerously salty salads. Reducing salt is the most cost-effective measure to reduce the number of people dying or suffering from strokes or heart disease. We are now calling on PHE to take immediate action.”

Statement from Abokado: The nutritional information on Abokado's website for the Teriyaki Dressing included incorrect data. In a statement from Abokado this afternoon a spokesperson said: "There is an error in our data. The salt content of The Teriyaki Chicken Rice Salad is 1.67g per serve. The separate (optional) pot of Teriyaki Dressing is 1.15g per 25g pot, making the total salt content 2.82g, if both are consumed together." Abokado has now updated the nutritional content on its website to reflect this correct data. The spokesperson said: "We always strive to give our customers a balanced range of breakfast and lunch options and have treated this matter with the greatest priority"

Top Tips To Ditch the Salt from your salad: 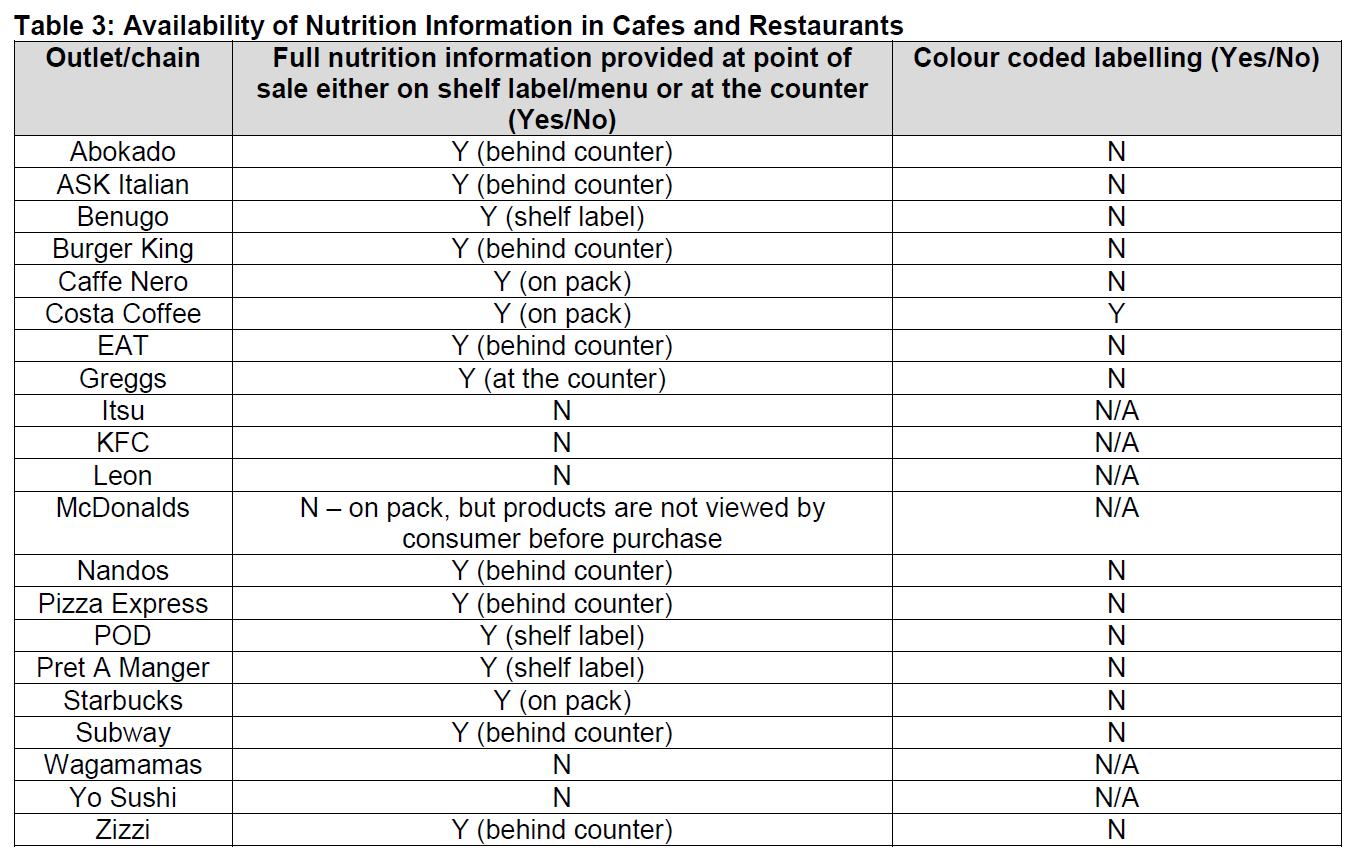 9. Government criteria for colour coding on a front of pack label https://assets.publishing.service.gov.uk/government/uploads/system/uploads/attachment_data/file/566251/FoP_Nutrition_labelling_UK_guidance.pdf. For salt, the criteria for low (green) is ≤ 0.3g/100g