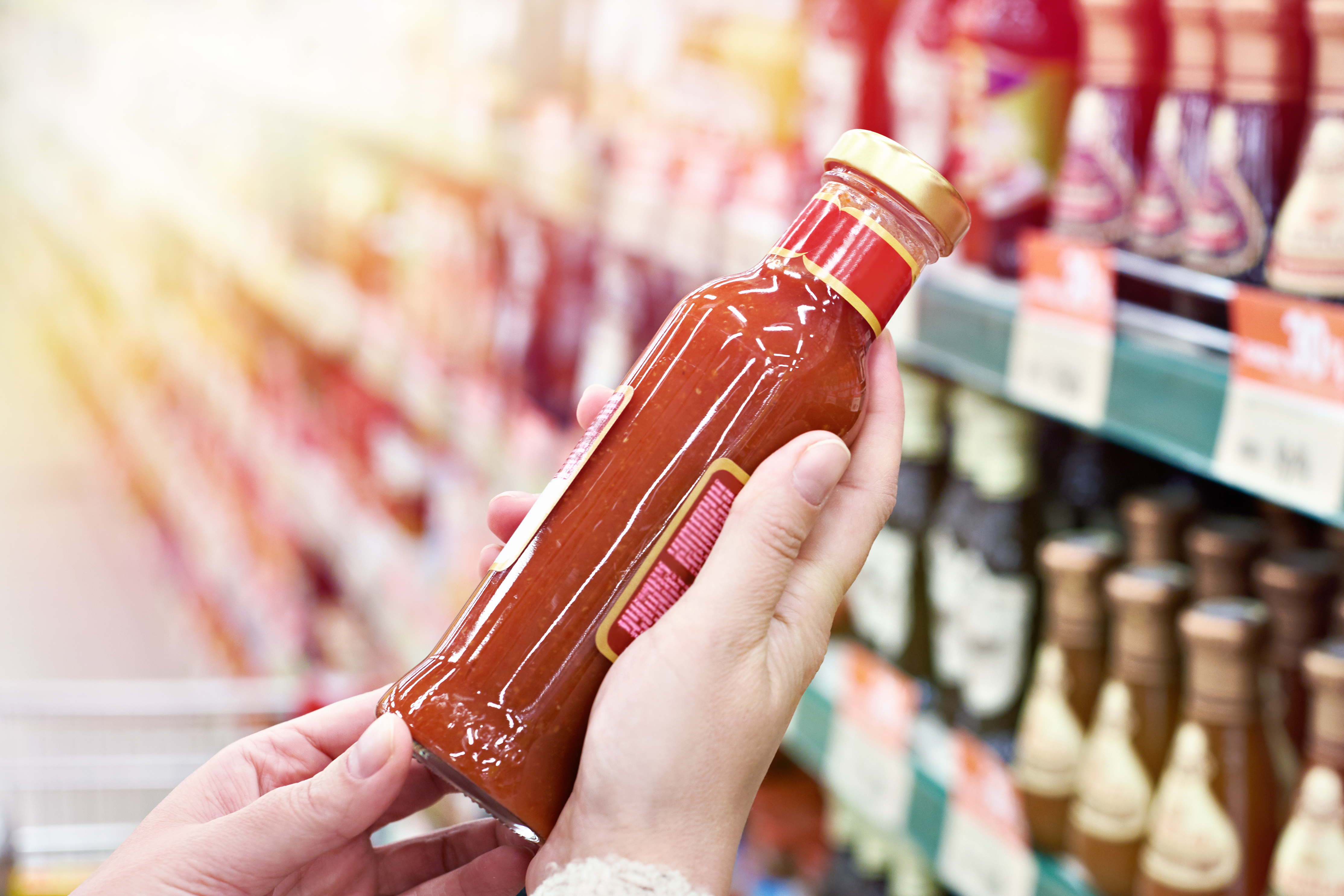 A NEW nationwide product survey by Action on Salt has exposed the unnecessary levels of salt present in many table sauces, Asian sauces and marinades. The expert group based at Queen Mary University of London is today calling on the Government to deliver a detailed and robust salt reduction programme for 2020. This should involve extending the salt targets to include categories that have so far been ignored, along with mandated targets for key contributors of salt in the UK diet. Mandatory front of pack colour coded labelling across all food and drink is also an urgent necessity.

In Action on Salt’s review of 357 products, over one in two sauces (54%) are found to be high in salt and would receive a red label on front of pack.[i] What’s more, where products do have salt targets set by Government[ii], over a third (38%) currently exceed their respective maximum target, despite these targets needing to be met by 2017.

The saltiest sauces surveyed are Asian sauces, many of which do not have specific salt targets for industry to follow. Whilst 88% of Asian sauces are high in salt and would receive a red label on front of pack, the vast majority (80%) are lacking front of pack colour coded labelling, making it difficult for the consumer to tell at a glance what the salt levels are.

Across all the different sauces, variation in salt content was evident with some brands containing a fraction of the amount of salt as their competitors (see table 1) demonstrating that reducing salt is possible with no technological implications in doing so.

When it comes to lower-salt varieties, many products are not always readily available in all supermarkets, meaning customers are not given enough options to choose from. Without front of pack labelling, consumers are even less able to tell at a glance which ones are lower in salt.

The saltiest sauce surveyed was Blue Dragon Fish Sauce, with 26.7g/100g salt; just one tablespoon would provide 4g salt – that’s TWO THIRDS of an adult’s maximum recommended intake for the day[iii], and the equivalent of nearly nine anchovy fillets![iv]. 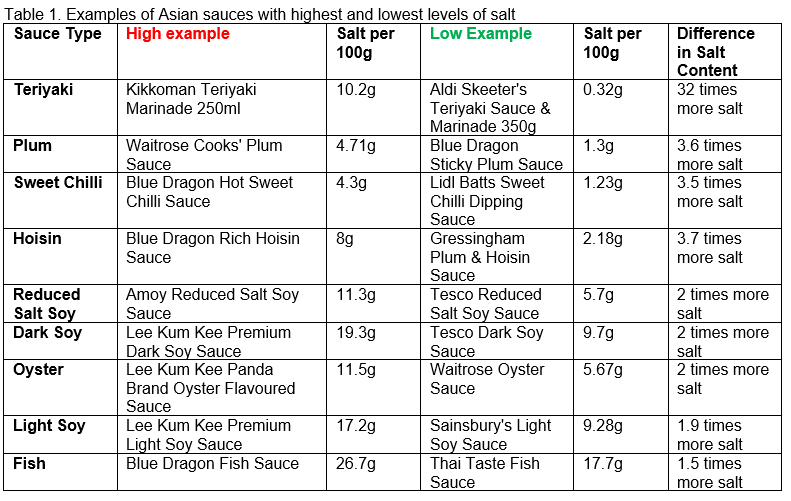 40 sauces surveyed claim to be suitable for marinating[1] (see data sheet). Of these, 58% are high in salt and the remainder are amber. One of the saltiest marinades is Nando’s Peri-Peri Sauce with 2.2g salt/100g.  Unfortunately only seven marinades display colour-coded labels on front of packaging.

261 products were grouped as table sauces including hot sauce, tomato ketchup, mayonnaise and brown sauce, as well as peri-peri and BBQ sauces[1]. Nearly half (44%) are considered high in salt (i.e. >1.5g/100g), with only eleven being classed as ‘low’ (≤0.3g/100g). Hot sauces were shown to be the saltiest of all table sauces per 100g and were the only table sauce category to not have a definitive salt targetii.

One of the worst examples is Franks RedHot Original Cayenne Pepper Sauce with 8.4g/100ml. The tomato sauce with the lowest salt content was Heinz Tomato Ketchup No Added Sugar & Salt with 0.05g/100g, which has 36x less salt than their original recipe. This clearly demonstrates that it is possible to make a sellable product that tastes good.

Sonia Pombo, Campaign Manager for Action on Salt says: “These sauces are cupboard staples for many of us but we are unknowingly adding vast amounts of salt to our already salty foods. The message to the government is very clear: set robust salt targets for 2020 which will drive reformulation. This should also include mandatory targets for the main contributors of salt in UK diet so that everyone’s health benefits, including the socially deprived. Mandated colour coded front of pack labelling should also be implemented immediately so that consumers can make healthier, more informed choices”.

Zoe Davies, Nutritionist at Action on Salt explains: “Many of us love to cook and make our food taste good. However, using lots of these salty sauces and marinades could be compromising our health as many of us are still eating more salt than the recommended limit of 6g (1tsp) per day.  There are much healthier and tasty alternatives available. Always read the label, or use free apps such as FoodSwitch[i], which allows customers to scan the barcodes of their shopping to see the ‘traffic light colours’, and make a healthier choice”.

Graham MacGregor, Professor of Cardiovascular Medicine at Queen Mary University of London and Chair of Action on Salt, adds: "The most cost-effective way to reduce cardiovascular disease is salt reduction. The Secretary of State for Health Matt Hancock must now commit Public Health England to setting new and ambitious salt targets for 2020, with strict monitoring mechanisms to ensure all members of the food industry comply. Failing to do so will result in thousands of people suffering or dying from strokes and heart disease. One gram reduction in population salt intake prevents more than 4,000 premature deaths per year in the UK".

The 2017 salt targets were set back in 2014, and in 2018, Public Health England (PHE) released an analysis of the food industry’s progress[ii]. The report found that half of the top 15 contributors to salt intake had still not met their average salt targets, including the top three: bread and rolls, bacon and ready meals/meal centres.

The report revealed that table sauces were one of three categories with the lowest number of products at or below the maximum target (60%). What’s more, data from 2014 suggests many products were already close to achieving their respective 2017 target. Very little progress has since been made with reducing salt levels in these food categories over the last five years.

This survey also highlights those sauces that do not have salt targets including fish sauce, soy sauce and hot sauce. These sauces are extremely high in salt and contribute significantly to the UK diet, yet without a specific target, there is no reason to expect the food industry to reduce the salt content.

A comprehensive salt reduction programme now needs to be reignited and the food industry cannot, and must not, be made solely responsible for it.  Targets should be made mandatory, with penalties given if they are not met.

These findings coincide with a new study published today in the BMJ Open[iii] which analysed the salt content of sauces in the UK and in China.

Overall, the findings suggest that salt targets (even voluntary ones) can be an effective policy tool as long as there are clear mechanisms for monitoring and penalties for non-compliance.

Companies should also provide a greater duty of care to their customers and assist in driving consumer trends to lower salt varieties. This includes not selling these products at a premium, which unfortunately appears to be the case[iv].

Monique Tan, PhD Researcher and lead author of the BMJ Open study, adds: “We saw an overall decline in the salt content of sauces sold in the UK over the past 10 years, with the exception of the period between 2013 and 2015, whereby salt levels either plateaued or even increased. This is most likely the knock-on effect of the Responsibility Deal, introduced in 2011, where the responsibility for improving nutrition was taken away from the Foods Standards Agency and entrusted to the food industry. As a result, no salt targets were set for 2014. This disastrous deal derailed UK’s salt reduction programme which, as of today, still needs to be put back on track.”

In the early 2000’s the UK pioneered a salt reduction strategy with the Food Standards Agency and Action on Salt with the setting of incremental salt targets, so that the food industry was slowly reducing the huge and unnecessary amounts of salt they add to food. This resulted in a fall in UK population salt intake, a fall in average blood pressure and more than 12,000 lives have been saved from preventing strokes and heart disease. However, in 2010 responsibility for salt reduction was switched to the Department of Health and the food industry was made responsible for policing itself, a policy that unsurprisingly failed. Further salt reduction targets were set to be achieved by the end of 2017 but little action has been taken to ensure the food industry is meeting these targets. PHE are now responsible for the UK salt reduction programme but so far have done little or nothing. All of the above has meant that the salt reduction programme has been slowed down with the result that many thousands of people have died unnecessarily and huge and unnecessary costs have been incurred by the NHS. Salt is the forgotten killer; the time has come for PHE to allocate sufficient resources to immediately resuscitate the UK salt reduction programme.

[i] FoodSwitch UK app helps you find healthier choices – simply scan the barcode of your regular brand to get colour coded nutrition information and see a list of healthier alternatives. Download the app actiononsalt.org.uk/foodswitch/

[iv] At the time of this survey (16.09.2019) lower salt varieties of Heinz Tomato Ketchup were sold at a higher price per 100g than their standard Tomato Ketchup (screenshots available on request)

[i] Government criteria for colour coding on a front of pack label https://assets.publishing.service.gov.uk/government/uploads/system/uploads/attachment_data/file/566251/FoP_Nutrition_labelling_UK_guidance.pdf.  For salt, the criteria for high (red) is >1.5g salt per 100g or >1.8g per portion

[ii] Public Health England have issued guideline salt targets for over 80 categories of food, which expired at the end of 2017. Mandatory targets would create a level playing field for the industry.

[iii] The maximum recommended daily intake of salt for an adult is 6g https://www.gov.uk/government/uploads/system/uploads/attachment_data/file/338782/SACN_Salt_and_Health_report.pdf