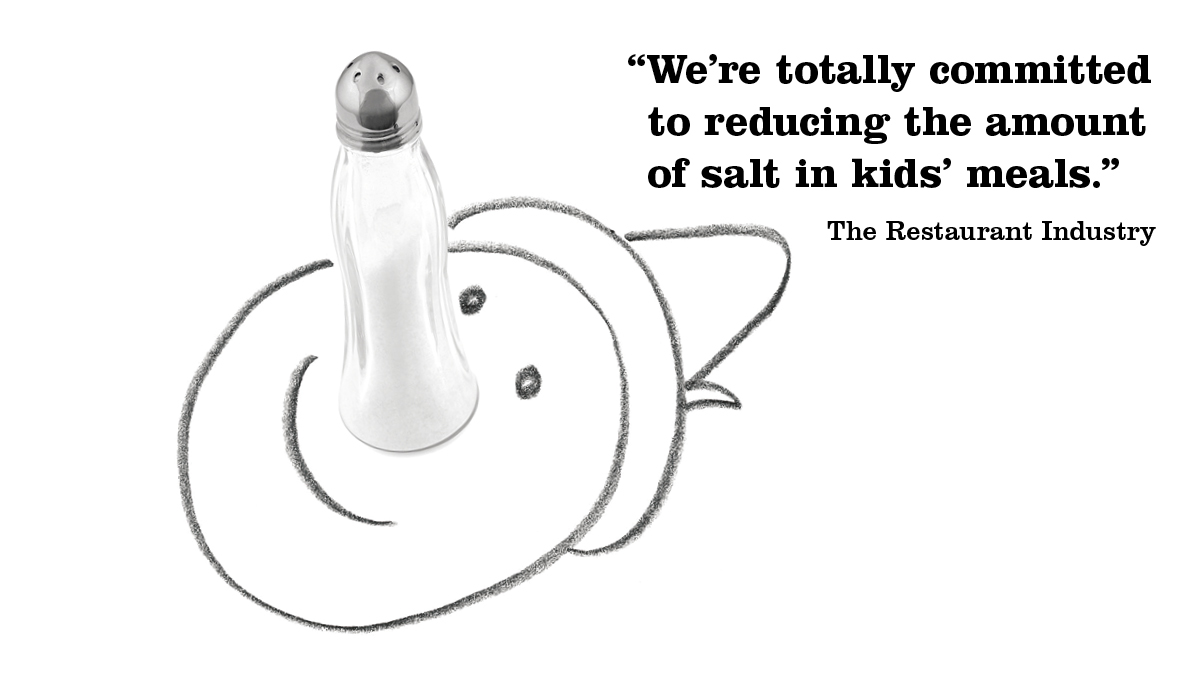 A NEW nationwide product survey1 by Action on Salt, the expert group based at Queen Mary University of London, has exposed the astonishingly high amounts of salt found in children’s Out of Home (OOH) meals, which demonstrates dismal progress made by the sector following a similar survey carried out in 20152.

Today, Action on Salt is calling for urgent high salt warning labels on children’s menu dishes with more than 1.8g of salt per serve (i.e. the 2017 salt target for OOH children’s meals set by Public Health England3 (PHE)) and follow New York City’s example which alerts consumers to high salt meals to help families and parents find healthier options4. It’s imperative that families know what is in their child’s food and until clearer nutrition labelling is introduced to the OOH sector, companies should take responsibility and reveal the dishes that are high in salt, says the experts.

Of the 351 meals surveyed, of which 12 were sent for laboratory analysis, 41% (i.e. 145) were HIGH in salt, with more than 1.8g of salt per portion. If colour coded labels used in supermarkets were used in the OOH sector, these meals would have a red label for their high salt content5.

The worst offender for salt content was TGI Friday’s Chicken burger with crispy fries and baked beans with an astonishing 5.3g/portion – that’s almost as much salt as an ADULT’s recommended daily limit of salt (6g) and equivalent to more than 11 bags of ready salted crisps6!

29% of the 218 meals surveyed in 2015 had 2g of salt or more per portion (i.e. the maximum recommended intake for 1-3-year-olds7) compared to 37% of the 351 meals surveyed in 2019. This highlights the complete lack of commitment of the sector to reduce salt in their menus, and a lack of care for consumer health.

Of the dishes that appear in both the 2015 and 2019 surveys, 39% have achieved a reduction in salt content BUT 20% have seen no change in salt content and a worrying 40% have actually INCREASED in salt.

When it comes to the variation in salt levels in meals of a similar type, the findings reveal a big difference. For example, the saltiest burger meal had SIX TIMES more salt than the least salty burger meal:

The majority of children’s meals in the OOH sector include side dishes BUT a salty side dish can add an extra 1g of salt to the meal compared to a low salt side dish. For example, Wetherspoon’s chips had 1.2g of salt per portion compared to Brewers Fayre Chips with no salt – that’s not even including any sauces a child may add to their food. Always ask for ‘no salt’ on your chips!

Lower salt meals were available across all outlets showing how unnecessarily high salt meals are.

AND it’s not just salt – many of these meals are packed with excessive calories and fat. For example, Hungry Horse Large Double Cheesy Burger with Fries & Baked Beans has 1054 kcal per portion, more than half the recommended daily calorie intake for an adult8 and more than double the amount found in Brewers Fayre Chicken Burger with Two Mini Jacket Potatoes and Baked Beans (448 kcal). It would take an 8-year-old eight hours of swimming to burn off the Hungry Horse meal combo9.

Mhairi Brown, Nutritionist at Action on Salt explains: “This survey highlights the shocking levels of salt still present in many children’s meals, even though it is well known that dietary habits formed in childhood influences what you eat for the rest of your life. Protecting children’s health should be a priority for all food and drink companies - the out of home sector must act now and take salt off the menu for children.”

Zoe Davies, Nutritionist for Action on Salt and FoodSwitch says: “Thankfully, many products in supermarkets display colour-coded front of pack nutrition labels which allows consumers to take personal responsibility and use apps, such as the free FoodSwitch app, to compare products and find the healthier option. It’s time for the out of home sector to take responsibility and offer us the same level of information.”

Katharine Jenner, Nutritionist and Campaign Director of Action on Salt says: “As a parent, it is so hard to try and find food and drink products that are both nutritionally balanced AND appeal to your kids. Children aged 4 to 6 should have half as much salt as an adult – just 3g – a day maximum yet they are eating much more than this. These food companies have known for years that they need to reduce salt, yet they are neglecting to do their civic duty and are putting our children’s health at risk.”

Graham MacGregor, Professor of Cardiovascular Medicine at Queen Mary University of London and Chair of Action on Salt, adds: “The Secretary of State for Health has promised long awaited new voluntary salt reduction plans in his green paper by Easter 201912, and they can’t come soon enough.  Reducing salt is a shared responsibility between the food industry, individuals and the government and is the most cost-effective measure to reduce the number of people dying or suffering from entirely unnecessary strokes and heart disease.

“We’ve already seen the success of the UK’s previous work on salt reduction and we encourage the Secretary to mandate his plans, formalising them and helping to ensure progress is sustained, with huge cost savings to the NHS.”

This Salt Awareness Week, Action on Salt are calling for:

Action on Salt encourage everyone to eat less salt and to enjoy the natural flavour of food.  Despite the UK leading the world in salt reduction we are all still eating too much salt, with a population average intake of 8.1g per day - much more than the maximum daily recommendation of 6g per day for an adult (about a teaspoon).

Tips to reduce salt when eating out

*Table 1: The salt content of these dishes was measured by Public Analysts. Please see reference 1 for more information

Prior to release, all out of home eating establishments included in the survey were contacted for comment.

A spokesperson for TGI Fridays said “We strongly dispute the findings of the Action on Salt surveyas independent nutritional analysis has shown our kids chicken burger meal to contain 1.5g of salt, not 5.3g as cited in the report. This is all the more disappointing as we have long supported Government's salt reduction programme since 2012 with a focus on children's meals. We will continue with our work on salt reduction across all our menus as well as other nutrients in support of the Government's ambition to tackle childhood obesity”.

As detailed in reference 1 below, where nutrition information was not available online or by request, meals are purchased at random from a select number of restaurants, and independently analysed for salt content by Public Analysts, and is an accurate reflection of meals that children would have consumed that day.

Ask Italian and Zizzi restaurants said: "Across our brands, we have made a commitment to providing not only delicious, but healthy food that meets modern dietary requirements, for instance, more vegetarian, vegan and flexitarian diets. Regular menu updates are therefore increasingly introducing lighter and more balanced options. Recent examples include ASK’s light pizza range and Zizzi’s vegan menu. We are also committed to tackling the growing trend towards childhood obesity, recognising the longer term impacts that high sugar and / or saturated fat diets can have. Sugar and salt content is clearly labelled on our nutritional & allergen information  and we have recently signed up to Public Health England’s childhood obesity initiative which sets out ambitious reductions for sugar, salt, saturated fat and calories in key foods through to 2020. To date, we have made significant progress with sugar reductions in both gelato and other key dishes on our dessert menu."

Wetherspoon spokesman Eddie Gershon said: "Wetherspoon notes the findings of the report. Our pubs offer a range of nutritionally balanced and lower salt meals. We have several children's meals that fall within the 1.8g salt target. We have also been working with our suppliers to reformulate and reduce salt in recipes across the children's and adult menus. For example, the new children's spaghetti bolognese meal (launches 6 March) has 0.5g of salt and the children's tomato and mascarpone pasta has 0.6g of salt. In terms of the meals with higher salt content, we will review these. We would also point out that parents can make their choice of meals on behalf of their children"

In the early 2000’s the UK pioneered a salt reduction strategy with the Food Standards Agency and Action on Salt with the setting of incremental salt targets, so that the food industry was slowly reducing the huge and unnecessary amounts of salt they add to food. This resulted in a fall in UK population salt intake, a fall in average blood pressure and more than 12,000 lives have been saved from preventing strokes and heart disease. However, in 2010 responsibility for salt reduction was switched to the Department of Health and the food industry was made responsible for policing itself, a policy that unsurprisingly failed. Further salt reduction targets were set to be achieved by the end of 2017 but little action has been taken to ensure the food industry is meeting these targets. PHE are now responsible for the UK salt reduction programme but so far have done little or nothing. All of the above has meant that the salt reduction programme has been slowed down with the result that many thousands of people have died unnecessarily and huge and unnecessary costs have been incurred by the NHS. Salt is the forgotten killer; the time has come for PHE to allocate sufficient resources to immediately resuscitate the UK salt reduction programme.

8. As part of a healthy balanced diet, an adult woman is recommended to have 2000 kcal per day to maintain her weight https://www.nhs.uk/common-health-questions/food-and-diet/what-should-my-daily-intake-of-calories-be/

9. Based on a child weighing 22kg (within the recommended weight range for an eight year old), the World Cancer Research Fund estimate it would take eight hours to burn off 1054kcal https://www.wcrf-uk.org/uk/here-help/health-tools/exercise-calorie-calculator

10. The average woman aged 19-64 years should eat no more than 20g of saturated fat a day https://www.nhs.uk/live-well/eat-well/eat-less-saturated-fat/

12. Department of Health and Social Care (2018) ‘Prevention is better than cure: our vision to help you live well for longer’ https://www.gov.uk/government/publications/prevention-is-better-than-cure-our-vision-to-help-you-live-well-for-longer